One of the reasons I started this blog was to be a resource for other military spouses.  Being married to a service member can be totally overwhelming at times and I want to be able to share my experiences and the things I learn along the way to maybe help someone out that is new to this world.  Because it really can be an entirely different world!

With that in mind, I am kicking off #MilSpouseMonday right here on my blog.  Each week I will be sharing something that relates to being a military spouse.  Eventually I am hoping to also start sharing other inspiring military spouses here and on my social media channels.

This may not be an educational topic, but I think before I start telling you about things I have learned as a military spouse, I need to share my story up to this point.  And I love a good introduction, so here goes!

I went to school in North Carolina, about 45 minutes from Fort Bragg.  After graduation I started working for my school in the Undergraduate Admissions office.  This meant that I spent each fall traveling around to different high schools in North Carolina representing my school at college fairs.  I made friends with a rep from another college and she wanted to set me up with her boyfriend’s friend.  With my permission, she gave Charlie my number.  We started texting back and forth for quite a while since I was traveling for work and he was gone for training.

So our first date actually happened a week after it should have.  Through an odd series of events I actually canceled our plans for our first date at the last minute because I needed to go pick up a rental mini-van. (My life is weird y’all.)

Luckily Charlie didn’t hold it against me and we rescheduled for the following week.  Our first date was to a haunted house on Halloween.  We hit it off really well, then after the haunted house we stood talking in the parking lot for a long time and he asked me if our mutual friend had told me that he was deploying in three months.  She hadn’t, but for some reason that didn’t scare me off immediately although it did put a lot of pressure on our relationship.  There’s nothing like starting off knowing that you have three months to decide if you are invested in someone enough to go through a deployment right?

Obviously I decided that I would stick it out because here we are now. But that isn’t to say it was without challenges.

The end of his deployment was actually during my travel season (a year after we met) so the last few months went by pretty quickly for me.  He came home from deployment and we went through the whole phase of getting to know each other again and settling into a routine.

Since we were living an hour apart we mostly only saw each other on weekends.  I always called it a “medium distance relationship.”  That lasted for another year with no shortage of people asking us when we were just going to hurry up and get married.  Shortly after our two year dating anniversary, Charlie proposed.

By the time we were engaged, Charlie had already made the decision to get out of the Army.  He was accepted to the Motorcycle Mechanics Institute in Orlando, FL.  When he got out of the Army he moved to Florida.

I finished out the school year at my job then followed him.  A year later we got married!

A couple months after we got married, I took a job back in North Carolina for the summer, so we did the long-distance thing for a couple months. The job ended just in time for Charlie to graduate from MMI.  We both had jobs lined up in Savannah, GA and planned to live in my family’s motorhome while we shopped for a house and got situated.  Unfortunately, as I was road tripping from Washington to Georgia in the motorhome with my mother, we found out his job had fallen through.  The job I had found would not have paid the bills so we were back to square one.  We ended up going to Texas and moved in with Charlie’s family while we got re-situated.  Luckily we both found jobs quickly.  Four months after moving to Texas, Charlie decided to join the National Guard. That was a very rocky process and I could probably write a novel on that situation alone.  During his time in the National Guard he was activated to respond to Hurricane Harvey…conveniently this was not too long before my due date with Oliver so he was a little concerned about missing his birth! Luckily Oliver decided to arrive five days late, rather than early, so there was no need to worry after all.

By the time Oliver was born, Charlie was considering going back to active duty and actually started the process a short time later.  He had been so ready to get out after his first six years, but after some time in the “real” (aka civilian) world, he realized that the Army wasn’t so bad after all.  There were actually many aspects of the Army that he missed.  Sometimes we talk about what life would be like if he had just stayed in the first time around, but we are very much aware that he needed the time away to gain some perspective and appreciate the benefits of the military. As we all know, there are challenges that come along with being in the Army, but in many ways they aren’t so different from a civilian job and there are a lot  more perks to military life! 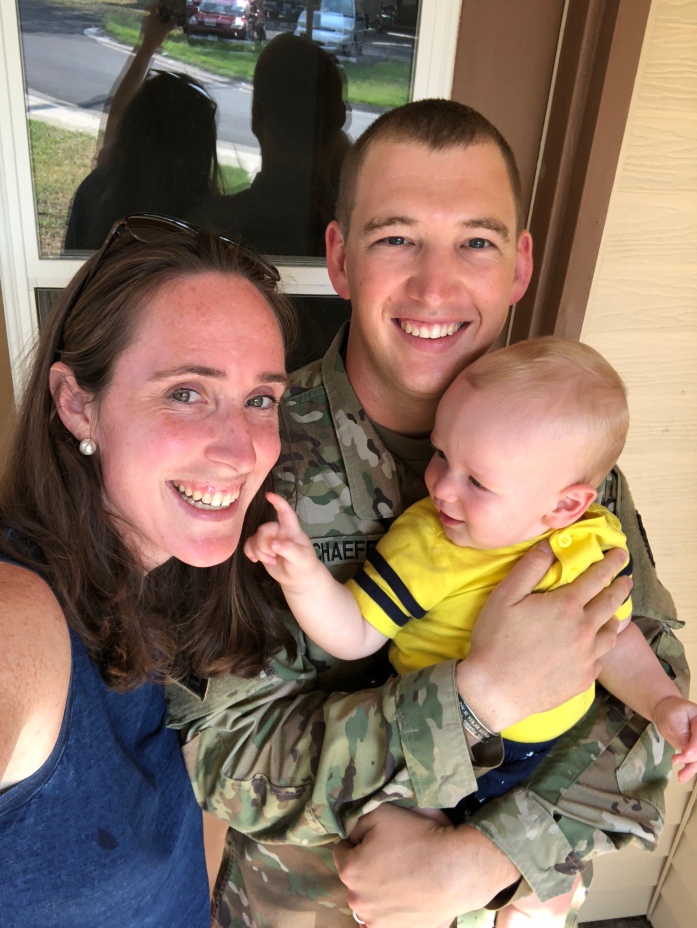 It took almost a full year to complete the process, but Charlie was eventually able to get his Conditional Release from the National Guard and we got orders to Fort Hood…a whole two hours down the road.  We joked that we had gone back to the Army to see the world and here we were. But in reality I think I can speak for both of us in saying the we were just incredibly grateful to get through the process.

The other benefit of coming to Fort Hood is that I have been able to stay at my job where I was working before we moved.  I work in Waco so I actually commute about an hour each way, but it could be a lot worse!  I know in the future it will not be so easy to find employment so I am grateful to have that while we are here.

And all that brings us up to today!  I am looking forward to sharing my journey as a military spouse with you and I hope that I can offer some insight, perspective, and maybe even inspiration to those who are new to this life or struggling to find their way.  My inbox is always open and I love to hear from you!

If you have a request for a #MilspouseMonday topic please let me know!

One Reply to “My Military Spouse Story”

My name is Jessica and I am a mom and Army wife.  I’m here to share my adventures as we make the most of where the Army sends us….and I’ll be offering some advice along the way!

This website uses cookies to ensure that we give you the best experience. If you continue to use this site we will assume that you are happy with it.OkPrivacy policy